St. Mary’s College and the Gesù

The Gésù has served for over 100 years (1865-1969) as the Chapel and the Auditorium of St. Mary’s College, founded in 1848 by Fr. Félix Martin, S.J. The College was intended to be a modern Montreal version of the famous Jesuit College, founded in Quebec City in 1635, which had introduced the renowned cours classique (Classical Studies) to New France.

The Ratio Studiorum, the Jesuit educational system, goes back to the days of Saint Ignatius Loyola. It aimed to educate the whole person: not only mind but also the integrity and good health of both body and soul–all this to help the student live his life “for the greater glory of God.”

This Jesuit curriculum relied on the classical literature of ancient Greece and Rome as well as on the pedagogical practices arising out of the Christian humanism of the Renaissance. In 1840, the Ratio was up-dated for the 19th century just before the return of the Jesuits to Canada in 1842.

The Ratio imposed quality time devoted to team sports and to the development of public speaking—as much, in fact, as to religious practice. By the early 1860s, the need became obvious both for a larger chapel and a larger academic hall or theatre. The Church of the Gesù was ready for Christmas 1865, and the 300-seat Theatre Auditorium a year later in 1866. 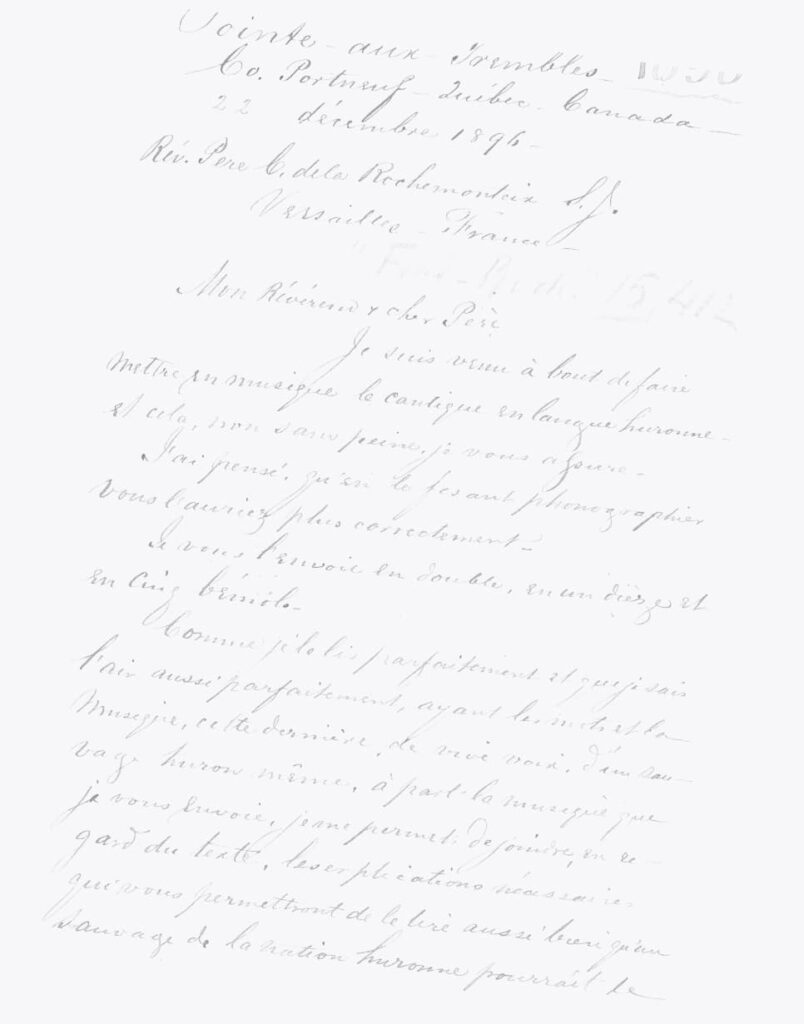 It has been said of St. Mary’s College in Montreal that it was unique—unlike any other institution in the city. It began as a fully bilingual institution (the only one to ever have offered in English the whole eight years prescribed by the Ratio). It became unilingual Latin for a time and, after 1896, unilingual French. The content of the programme also evolved, especially in the 1880s when the study of French classical literature was introduced and, later, when the study of modern languages such as German and Italian were added to the curriculum. Later still, chemistry and physics laboratories were added, as well as an observatory.

During a five year period (1852-57), there was an English-language business course and, for 16 years (1851-67), a Law School. Despite a few minor alterations, the eight year Classical Studies programme remained true to itself.

Thus the St. Mary’s “well rounded mind” was established for generations of students. From the seven who enrolled in 1848, to the 2,700 in 1968, when the Royal Commission chaired by Msgr. Alphonse-Marie Parent recommended fundamental changes to higher education in Quebec. These changes and the founding of the University of Quebec at Montreal brought on the decision by the Jesuits to close the College in 1969 and to have the building demolished in 1975.

Religious practice was at the heart of student life at St. Mary’s College. At six o’clock, the boarders’ daily order began with a Mass that was preceded by a half-hour of spiritual reading taken from a special collection of prayer and devotional books. For day students Mass was at eight o’clock. At the end of the afternoon there was time allotted for confession and the recitation of the rosary. Supper at seven o’clock was followed by a quarter hour of spiritual reading and by night prayers. On Sundays there was an additional High Mass before lunch and sung Vespers at two o’clock.

By 1860, as the number of students reached 250, the chapel for daily Mass and Sunday Vespers had become too small. The Gesù, a new chapel that would also be open to the public, was eventually finished and inaugurated in 1865.

Students and Jesuits alike were happy with the easy access to the new chapel linked to the main wing of the College in such a way that the entire student body could be evacuated efficiently. Some even said that only five minutes were needed to move four floors of students from classrooms into the pews of the nave—thanks to the magic of a grand spiral staircase.

Once in the Gesù they could not but be impressed by the extraordinary iconography dominated by the two huge paintings representing the first communions of the Jesuit “Boy Saints,” patrons of youth: Stanislaus Kostka, 18, and Aloysius Gonzaga, 23. The students could thus feel very much at home in the Gesù, surrounded by their patron saints, and high above them all, the Sacred Heart of Jesus dominating the entire holy space.

Theatre in the service of Learning, Religion and the Arts
Scientia. Religioni. Artibus.

The Ratio Studiorum, the Jesuit “plan of studies,” considers theatre as essential to a classical education. St. Mary’s College quickly took up the tradition which, in fact, went back to the 1658 production performed in Algonquin, French and Huron at the Jesuit College in Quebec City. Ésope au collège, a work by an 18th century Jesuit, was the first play produced at St. Mary’s in 1852. In 1866, the play L’enfant prodigue by the same author, Paul de Cerceau, S.J., inaugurated the new theatre at the Gesù.

The long oratorical monologues throughout the play were special favourites. Produced for the first time in 1915 and starring Henri Letondal, it was repeated several times until 1939 when Jean Gascon played the title role.

Following the closing of the College in 1969, the Church and the Theatre of the Gesù continue on this original site to bear witness to the 400-year-old Jesuit tradition.

Team sports are a fundamental part of every Jesuit high school, college or university. From the very beginning at St. Mary’s College gymnastics and lacrosse were decidedly prominent, the latter remaining the favourite until the 1950s. Baseball, basketball, handball, pool, relay-racing, snowshoeing, volleyball followed in turn until hockey became the favourite. In 1858, the Student Council created a “Sports Council,” placing the then 17-year-old Honoré Mercier in charge of all sports equipment.

It was cooperation between St. Mary’s and Collège Mont-Saint-Louis that launched the Intercollegiate Hockey League and St. Mary’s was the first to have a well-organized lacrosse team. Later, in the intercollegiate football league, the St. Mary’s team was the only one to win a championship three years in a row.